A visit to Italy is not complete without travelling to Milan, Italy’s international hub for fashion that would make the French jealous, culture that epitomizes European life and commerce that crowns this city the default capital over Rome.

Milan, located in the northernmost Lombardy region, has had an eclectic history of rulers (Roman, Spanish, Austrian, etc.) due to its proximity to the rest of Europe and is therefore far more independently spirited and multicultural than the southern Italian peninsula.

No Wrong Way to Indulge in Milan

There are few places in the world where shopping and eating could be considered religious experiences. Milan’s boutique-lined streets offer some of the world’s most exquisite and exclusive styles, dominating the cutting-edge of design.

Travel to Milan to pamper yourself, but keep a keen eye for how you might redecorate your outdated (by Milan standards) living room. Brera is the most sophisticated and elite shopping area, centrally located and also home to the Pinacoteca de Brera, one of the most coveted museum collections in Europe.

Speaking of consumption, a leisurely dinner of saffron-scented risotto and signature osso buco will surely provide rejuvenation after all of that shopping. Make sure to enjoy the local wines of Lombardy, particularly from the Brescia region, which set a whole new standard for table wines.

The hyper-modern milieu of Milan is accompanied by a tremendously rich history, dating back to 600 BCE when the Celts arrived. Milan was at one point the capital of the Western Roman Empire, the soul of the Renaissance, and conquered by France and the Habsburgs.

Milan finally gained independence in the 18th century, along with the creation of the Italian state. It is important to note that Milan, as a core industrial centre of Mussolini’s puppet state, was heavily bombed during World War II, making it a miracle that sites nearly 1600 years old are still standing in the city centre today.

Travel to Milan must include a visit to the Duomo, which dominates the city center as the world’s fourth largest church. This 14th century Gothic architectural monument is crowned on its tallest spire by the Madonnina (little Madonna) and covered in 3900 gold leaf plates.

Nearby, the famous La Scala Theater is one of the great opera houses of the world and should not be missed; indulge yourself by attending a concert to experience the true magnificence of the art and acoustics together. The Theatre and Theatre Museum are also open for public tours.

Lastly, walk along with the Columns of San Lorenzo, Milan’s only Roman remains of a temple that dates back to the 2nd century.

Whether your interests are business, pleasure or academic, the careful sophistication of Milan’s contemporary lifestyle leaves room for any traveler to enjoy all three.

For more information on international travel and discount airfare to Milan, visit www.cfares.com. 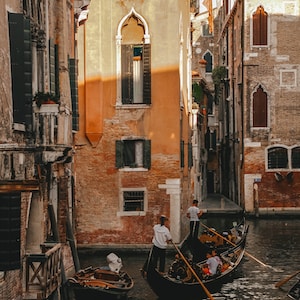 Travel to Italy: Rome and Venice